The Formation of Nation-State and Cultural Identity: A Georgian Perspective

The paper discusses cultural specifics of the Georgiansâ€™ mental perception in the context of formation of the modern nation-state. The research has been conducted using the experimental psychosemantic method, based on which semantic spaces, reflecting the categorical system of meanings in the contemporary Georgians' mentality, have been built. The material for the research consisted of universal (etic) categories interpreted within the cultural system specific to the Georgians (emic means of interpretation). For this purpose, we have referred to the historical facts, linguistic and folk material, and religious aspects of the Georgian Orthodox Christianity. The so called "Nation-State" cluster is the largest one out of several clusters revealed by the research. Its content has been interpreted based on semiotic analysis that highlights the semantic logic representing essential aspects of the Georgians' collective representations, namely, their ethnic picture of the world. It is stated that national identity is the main idea influencing the development of the Georgian state and culture, and that the value of defending and preserving national identity is the oldest and strongest layer of the Georgian mentality. It is demonstrated that "Georgian" has always been the main criterion for evaluating all the life events and even personal self-realization has necessarily implied the element of being Georgian as its inseparable part. The research data confirm that till today the Georgians are evaluated in this context and it should be the main reason for why such concepts as "success","achievement","independence", and "freedom", which definitely represent personal context in the Western countries, are attributed to the wider context of nation-state in the Georgian mentality. 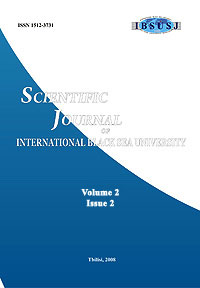